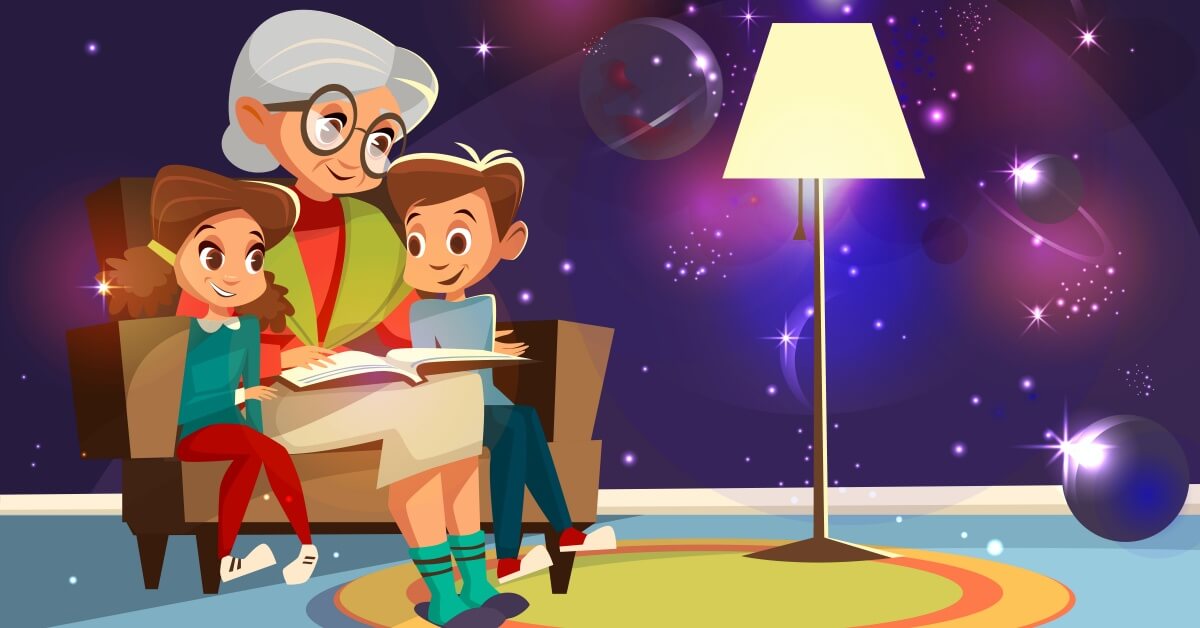 We are all familiar with storytelling being the oldest form of teaching. It creates bonds between several generations of various communities, gives answers to some of the biggest questions of creation and life to our young minds. Stories define who we were and who shall we become into overtime.

Storytelling is the basic step for children around the globe. To your young kids, magic happens every time someone shares a story with them. They develop a sense of wonder and amazement for the world, the places they have only heard about but never been to.Storytelling is an old and unique way to instill a positive attitude in your children. Our moral short stories induce cultural aspects and promote moral education.

The art of storytelling induces purposeful talking in your child. Their public-speaking improves, and they are able to express themselves better compared to several other children of the same age. It raises their enthusiasm to read or hear more of these or even better, at times write some of their favorite parts.we prefer storytelling as a method to quickly increase the bar as well as develop skills, knowledge, and confidence in various fields of interest.

Once upon a time, two silly goats lived in a village. A narrow bridge went over a river in that village. On a fine day, both the goats decided to want to cross the narrow bridge. One silly goat stood on one side of the bridge and the other one stood on the other side. Now, one of the goats said to the other, “I shall cross first. Allow me to pass.” Hearing this, the other one said, “No, I shall be the one to cross first. You move aside and allow me to pass”. Neither of them would surrender and let the other one pass. So, at last, both of them reached the middle of the bridge. There, they began to fight awfully over the issue. All this fight finally resulted in both falling into the river and they drowned.

Moral of the story: One should always respect, value, and love their neighbors.

2. THE FOX AND THE SOUR GRAPES

Once in a dark forest, a fox was hungry. It was roaming around in the forest, searching for something to eat. It stopped under a shady region and as he looked straight up, he saw a bunch of juicy grapes hanging from a vine. It was a bunch of luscious and plum grapes. The more the fox stared at it, the more it grew hungry. In an attempt to get those grapes, the fox jumped high. But it missed the grapes. He jumped again and did not make it. No matter how high it jumped, it was never enough to grab the bunch of grapes. After trying a couple of times, the fox gave up. But it could not bear to stand the fact that it couldn’t have the grapes. So, it said to itself, “Ah, what’s the use? These are sour grapes anyway” and walked away.

Moral of the story: It is always easy to degrade something one cannot have. We should accept that we will end-up having everything good and whatever we cannot have is not necessarily bad. There are a lot of things that we want but cannot have. This does not mean that we should degrade its value.

3.THE LION AND THE MOUSE

In a deep, dark jungle, a lion was fast asleep under a huge tree. Suddenly, he felt something tickling his nose. He let out a loud sneeze, “Aaaaaaaaaaaaaaaa-chooooooooooooooooo!!!!!!!!!” and the lion woke up. He was startled to see a little mouse! The fierce lion roared, “How dare you little creature awake me!”. Just as he raised his huge paw to finish off the mouse, the mouse cried, “Please don’t kill me, Oh Mighty Lion,” begged the mouse. “You never know, someday maybe I can save your life too.” The Lion burst into laughter and said “You tiny little creature, you are too small to save anyone any day! Besides, who will dare to harm the king of the jungle? Aaarrrhahahaa.” The lion let the little mouse go that day.

The very next day the Lion was strolling in the jungle when he walked into a trap. Having landed in this frightening and horrible situation, he cried helplessly, “Heeeeelp!!!!”. This time the mouse heard him. The mouse realizing the unfortunate incident, exclaimed, “Do not worry, I will help you escape from the trap.” Having said this, she started nibbling through the ropes of the trap. She did it quickly and efficiently. In some time, the Lion was free. He apologized to the mouse saying, “I am sorry, little mouse. I was wrong when I said little creatures cannot save the King of the Jungle. Even little friends are of great importance and should be valued.”

Moral of the story: Having mercy upon others always brings reward. We should value and respect everybody. That way, we too might get benefited in the long run.

4.THE DOG AT THE WELL

Once upon a time, a dog and her puppies lived on a farm next to a well . The mother dog had warned her pups not to go near the well or play around it, long time back. Everything was going fine, until one day one of the pups started wondering why their mother asked them not to go near the well. Hence, he decided to explore the well. The little pup went to the well. He climbed up the wall of the well and peeked inside. Upon peeking, the pup was rooted to the ground. He saw his reflection in the water of the well but misunderstood it for another dog. Quite surprisingly, the pup saw the other dog in the well, copy his actions. He got mad at the other dog (his reflection) for imitating him throughout. Thus, to end this game, he decided to fight with the dog and jumped into the well. Immediately after jumping in, he realized there was no dog in the well and that it was his reflection. The pup kept barking and paddling his feet for almost the entire day till one of the farmers heard him and rescued him. The little pup thus learned his lesson.

Moral of the story: We should listen to our elders. We should not blindly-trust each of them, but when someone warns you of something, always listen to them.

One fine day, Tommy! the dog was taking a walk through a forest. He spotted a piece of cake under one of the trees. Without thinking much, he ate the delicious cake as he thought anybody else would have done. Suddenly, much to his astonishment, Tommy saw himself change into a deer! Not knowing how it happened and what to do next, he ran around for help in panic. This is when Wolfy! the wolf happened to walk past that way. Misunderstanding Tomy as a deer, he ran towards Tomy. Tomy, in a desperate attempt to be heard, cried out with all his energy. But it wasn’t a deer’s cry. It was like the barking of a dog. Tomy kept barking at Wolfy the wolf, “Woof…woof”. This scared Wolfy to his fits and he ran away as fast as he could. Realizing that nobody would understand that he was Tomy the dog and not a deer, Tomy gave up all his hope. He sat at a corner. But after some time, Dorkey found himself changing back to his real self, the dog. Later on, he found out that it was a magic cake that a witch had baked. She might have dropped one of them on her way. Tomy had ate the cake without knowing it was a magic cake baked by a witch.

Moral of the story: Never eat or take something without knowing everything about it. One should not be so greedy that he/she forgets to know the background of a thing before having it.

“Vowels For Kids: How To Identify If Your Children Are Ready To Learn Vowels?”